USAH’s new rules are in effect. 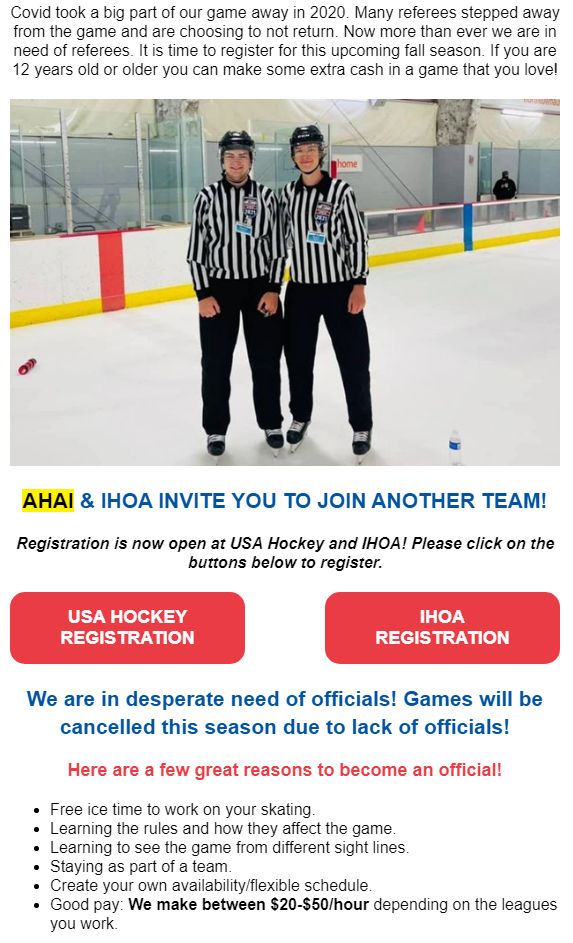 July 14, 2021 Colleagues and Fellow Zebras in the Central District-

As you know, I have had the honor of serving USA Hockey’s Central District as the District Referee-in-Chief since 2015. This is a role that I never imagined myself taking when I first started officiating, and I have had to follow in some amazing footsteps (Chet Stewart, Bill Spohn, Dave LaBuda, Bob Cunningham). Life takes unexpected turns and twists, and I was in the right place at the right time to assume this role and lead this district with the passion it deserves. I would be remiss if I didn’t mention that the Central District Affiliate Presidents, in selecting me, selected the first female District Referee-in-Chief in USA Hockey history. What an incredible honor! In my tenure we have developed a district plan encompassing communication, recruitment, education, development, evaluation, retention, and fiscal responsibility. We have sent so many officials to National tournaments and camps, where they work championship games repeatedly. We celebrated the success of our IIHF certified officials as they officiated the Olympic Games, World Championships, and many other tournaments. We participated in rewriting curriculum for seminars and “reimaged” the Central District camp structure. Annually we hold a Summer Summit for all Central District Officiating Program Staff, bringing all of our affiliate officiating groups (IHOA, MIHOA, WIHOA, and Midwest) together for a weekend of strategic planning around our six areas of concentration and to network with each other for solutions to issues we face. Each of our affiliates is so unique that these summit opportunities have been welcome as a way to exchange information and to work together to reinforce our standing as a district at the forefront of the officiating community. In short, we have done much “heavy lifting”.

As I said earlier, life takes unexpected turns and twists. Recently I made the decision to move to the Austin, TX area so that my daughter could grow up near family (we have a large extended family here), and so that I could assist my mother as she ages. Though I can attribute many of my positive life experiences to hockey, the best one thus far is being “Mommy” to my daughter, Tenley. I LOVE officiating, and thank God each night for what being a zebra has brought to my life. I have a lifelong hockey family and have had SO many opportunities to skate amazing levels of men’s and women’s hockey across the country. I will always cherish my hockey life. That being said, it is with a heavy heart that I have decided that due to distance and life’s demands, it is time for me to step away from my role as Central District RIC. Sometimes we officials have to make tough calls, and though this call is the toughest I’ve had to make, it is also the best one.

I will continue to work with the Central District to assist Tim Richter as he transitions into the District Referee-in-Chief role, and I will always be available to help. I thank you for your trust in me over the past six years, and I look forward to seeing you in a rink somewhere, someday. My phone number will remain the same, and my personal email address is: referette@gmail.com. Thank you ALL for your dedication to the Central District and to the officiating program. It has been an honor and a privilege to serve you.

To be completely registered, you must meet both IHOA and USA Hockey requirements.

and MUST WORK FIRST GAME WITH A MENTOR. INFORMATION WILL BE AVAILABLE AT THEIR SEMINAR.

*You must first be registered with USA Hockey as an official before you may register with IHOA.*

YOU MUST HAVE A VISOR FOR THE ON-ICE PORTION OF YOUR SEMINAR. NO EXCEPTIONS!!!

**PLEASE NOTE THE START AND END TIMES FOR YOUR SEMINAR.**

ALL Level 1 officials under the age of 18 by July 1 of the current year will be required to have a parent or guardian attend a short session at the beginning of the seminar. This meeting will outline how to become an official, how to get games, what to do if you have a problem with fans, and the responsibilities of the on-ice official.

*You must first be registered with USA Hockey as an official before you may register with IHOA.*

If you have any other questions about seminars, that are not found on the FAQs page, or the registration process (name changes, registration account mistake, etc…) please contact the IHOA Registrar for the State of Illinois registrar@ihoa.com

It is with great sadness to inform the IHOA community of the passing of Michael Osborn.

Mike was involved in an accident last Wednesday and passed away today. Please keep his family and friends in your thoughts and prayers through this time of great hardship and grief.

When further information is known, IHOA will pass it along.

Please note that there are TWO different sets of seminars: VIRTUAL and ON-ICE. Please be aware of which one you are registering for and the requirements. If you have any questions, please contact Registrar Dave Zednik.

***PLEASE be AWARE… The TBD ON-ICE Seminars will be updated when events are confirmed!***

will be USAH and sanctioned with no Illinois Department of Public Health restrictions.

The only way to work sanctioned games is to be completely registered.

Seminars will be starting soon after that.

Level 1 seminar: A hybrid of virtual and on-ice with ALL safety practices in place

When competitive play begins, you will be ready to hit the ice skating.

Let us look forward to a healthy and great hockey season.

as published by AHAI ADMINISTRATOR on APRIL 30, 2021

By Ross Forman – Kendall Hanley – who officiated one of her 13 seasons as an on-ice official in Illinois and served as a member of the IHOA Board of Directors – was named the 2021 Ben Allison Award-winner, presented annually to an official in the USA Hockey Officiating Development Program.

The award is voted on by 150 members of the USA Hockey Officiating Development Program and given to the official who best represents the characteristics that made Ben a special person and official, including always giving 100 percent on the ice and representing USA Hockey in the finest manner.

Allison was a level three USA Hockey certified official who was tragically killed in January 2015 at the age of 20. A native of Royal Oak, Mich., and a student at Illinois State University, he had been officiating for eight years and was a part of the Officiating Development Program for three years at various levels, including the NAHL. Allison attended and played for Crystal Lake South High School.

Hanley started officiating years ago while living in Dallas. She also has officiated in Denver, and during the 2016-17 in the Chicagoland area while living and working downtown.

“Living in Chicago was an awesome experience,” she said. Her local schedule included youth and high school games, and she traveled for USA Hockey-assigned games.

This season she worked in the USHL, NA3HL and the Western Collegiate Hockey Association. The season “had its ups and downs due to COVID,” she said. “This season more so than ever I’ve been very fortunate to be able to skate.”

Hanley praised her fellow Illinois officials for the experiences and memories, including a high school playoff game at Johnny’s Icehouse that featured the National Anthem sung by Jim Cornelison, who sings “The Star-Spangled Banner” and “O Canada” at Chicago Blackhawks games.

“That environment was awesome, with a packed house. It was a unique experience,” Hanley said.

“Being embraced and so welcome in Illinois hockey was an amazing experience in my career, something I’ll always remember.”

Hanley praised several Illinois officials for helping improve her game, including Erin Blair, Dave Zednik, Carl Sassolino and others. “There were a number of people in Illinois who were awesome to work with, just as passionate about officiating as I am,” she said.

“I know we would have been friends, on and off the ice, just based on his character, his character, what he represented,” she said of Allison. “I know how much he meant to so many people from the Chicago area. He made a tremendous impact on so many, especially people from Chicago.

She said the award “is one of the highlights” of her officiating career.

Eric Cowsill, Illinois Referee-in-Chief added, “In her tenure with IHOA, Kendall always displayed an uplifting attitude and willingness to help, whether it was teaching (at) seminars or helping new officials. It was obvious Kendall is invested in making grassroots officiating better and (she) continues to do so in current endeavors.”

It is with profound sadness and a heavy heart that we share the news that Mark Gore, a long-time Illinois official, passed away on January 29, 2021.

Mark was an official, mentor, supervisor, and volunteer in the hockey community. His passion for our game and the friendships that Mark developed over the years will be everlasting. His dedication to our game was so in-depth that IHOA created the Mark Gore Service award. Mark’s son, Nick, was also an Official. 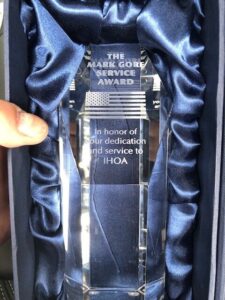 To read a great article reflecting on Mark’s life on and off the ice, click here: https://ahaienews.com/2021/02/01/remembering-mark-gore-a-mentor-on-and-off-the-ice/